The dress of Oliena (su hustùmene) is something precious. It is always hand-sewn, made of fine textiles, intense colours, elaborate shapes, and marvellous gold jewels. The seamstress, to make one, needs several helping hands: weavers, embroiderers and dyers. The dyers, in particular, use only local flowers to impress the colours of their land on the dress – maybe these are among the reasons why the traditional dress is still a very strong symbol of the Sardinian identity.

The costume was used for daily purposes until a few decades ago, but it was also seen as a status symbol – aside from its aesthetics, it would tell the town, age, wealth, and status of the wearer.

It was popularly used in Oliena until the 30s of the ’900 century. After that, it became a symbol of belonging, and it started being used only in particular circumstances, just like in the rest of the island. 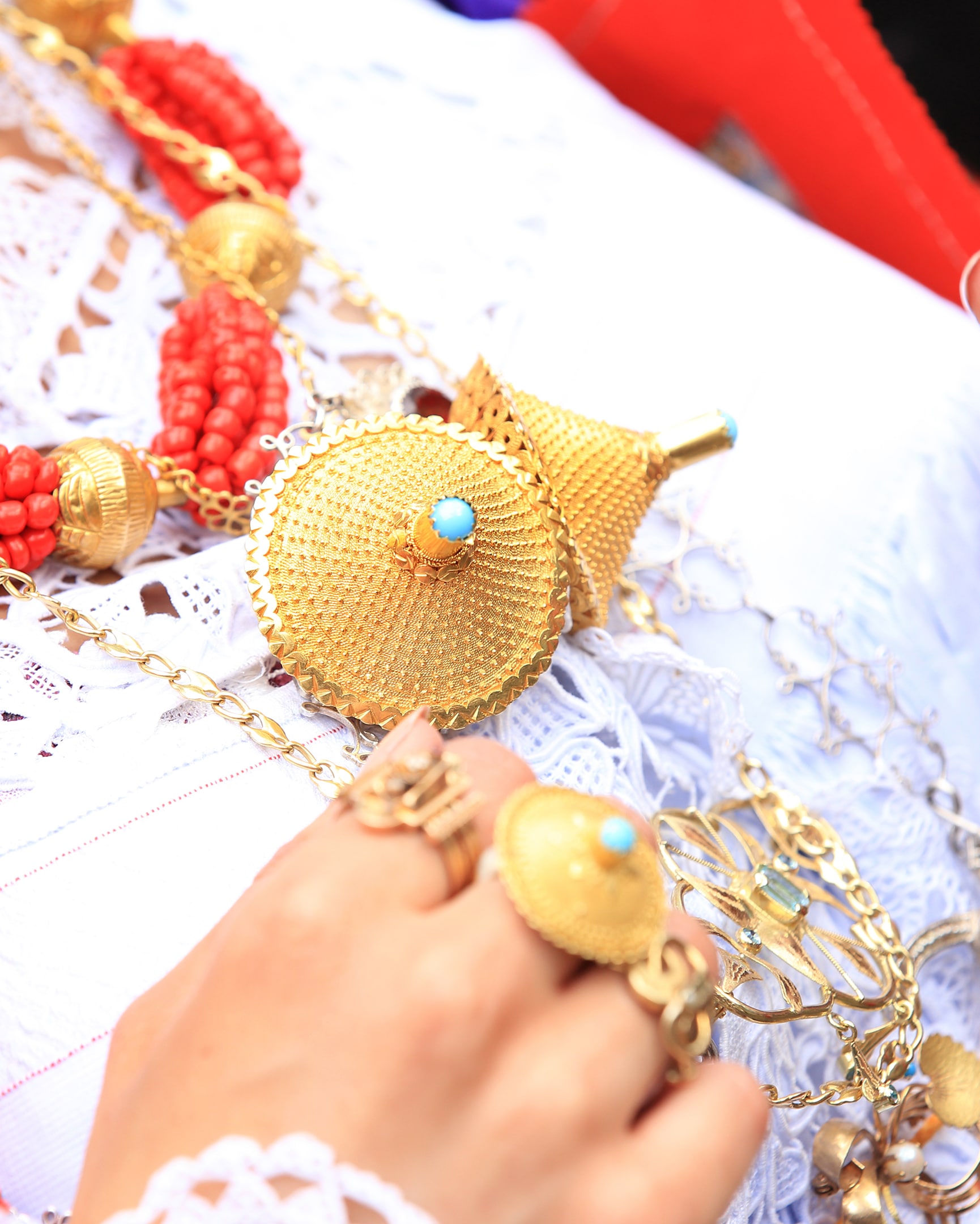 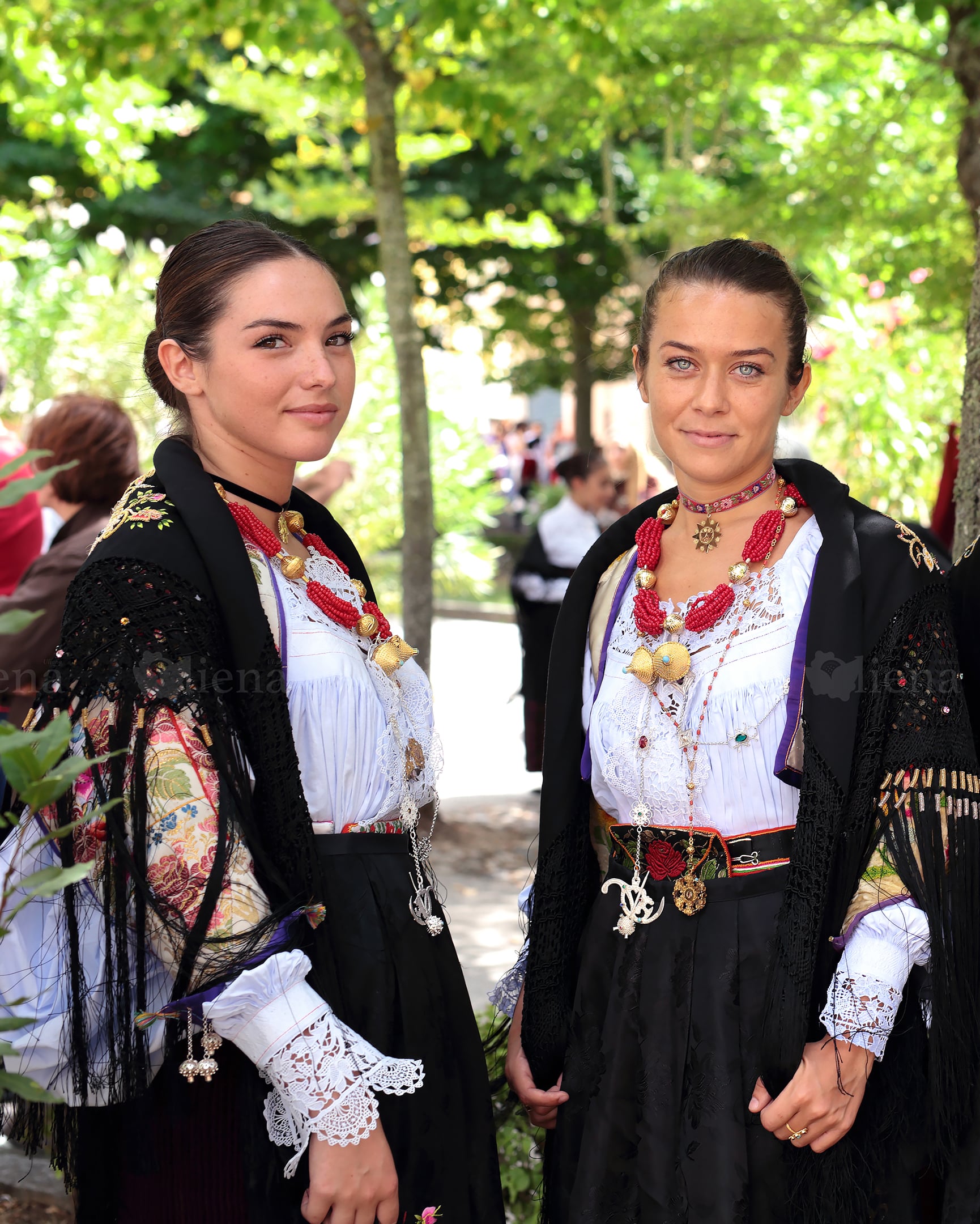 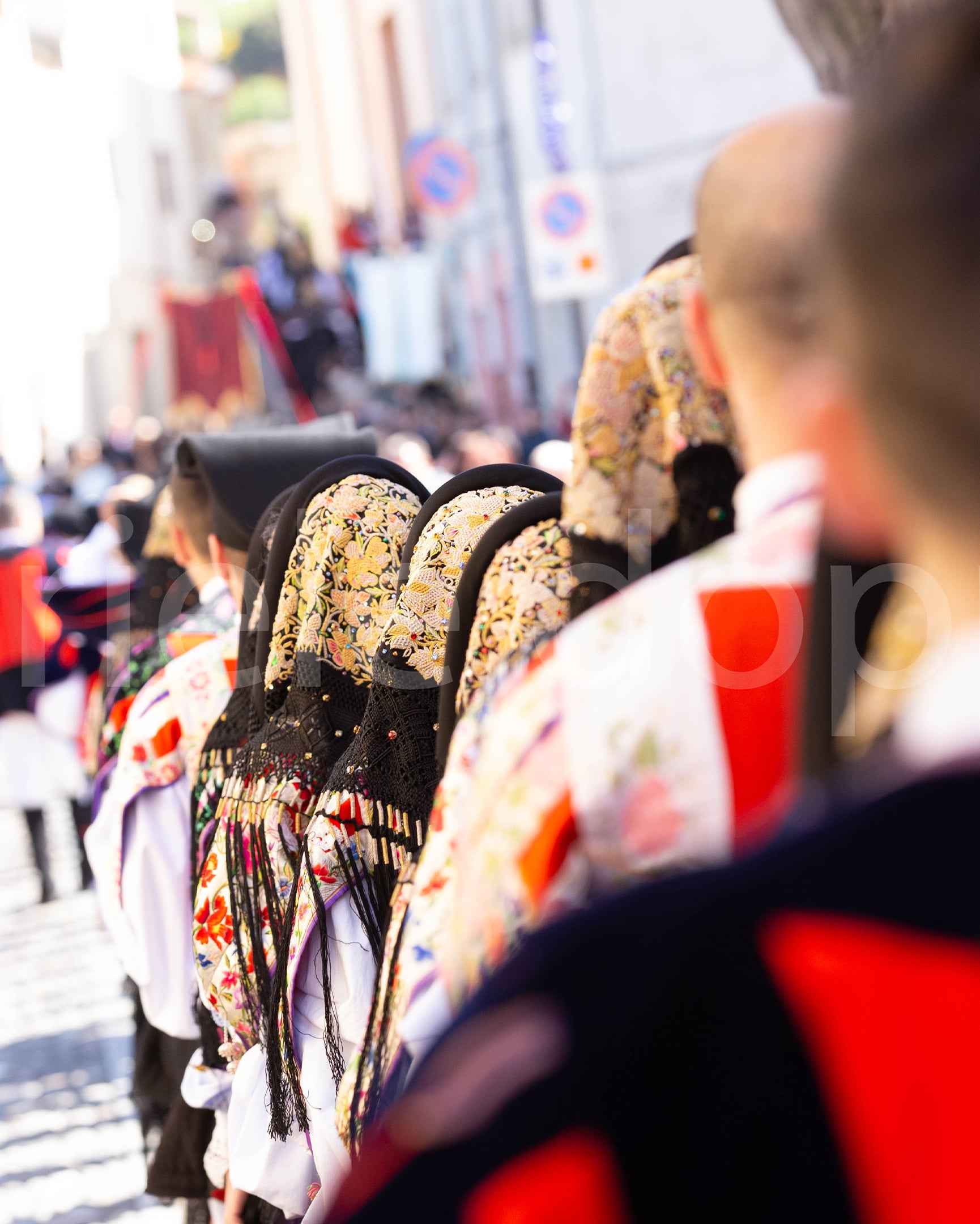 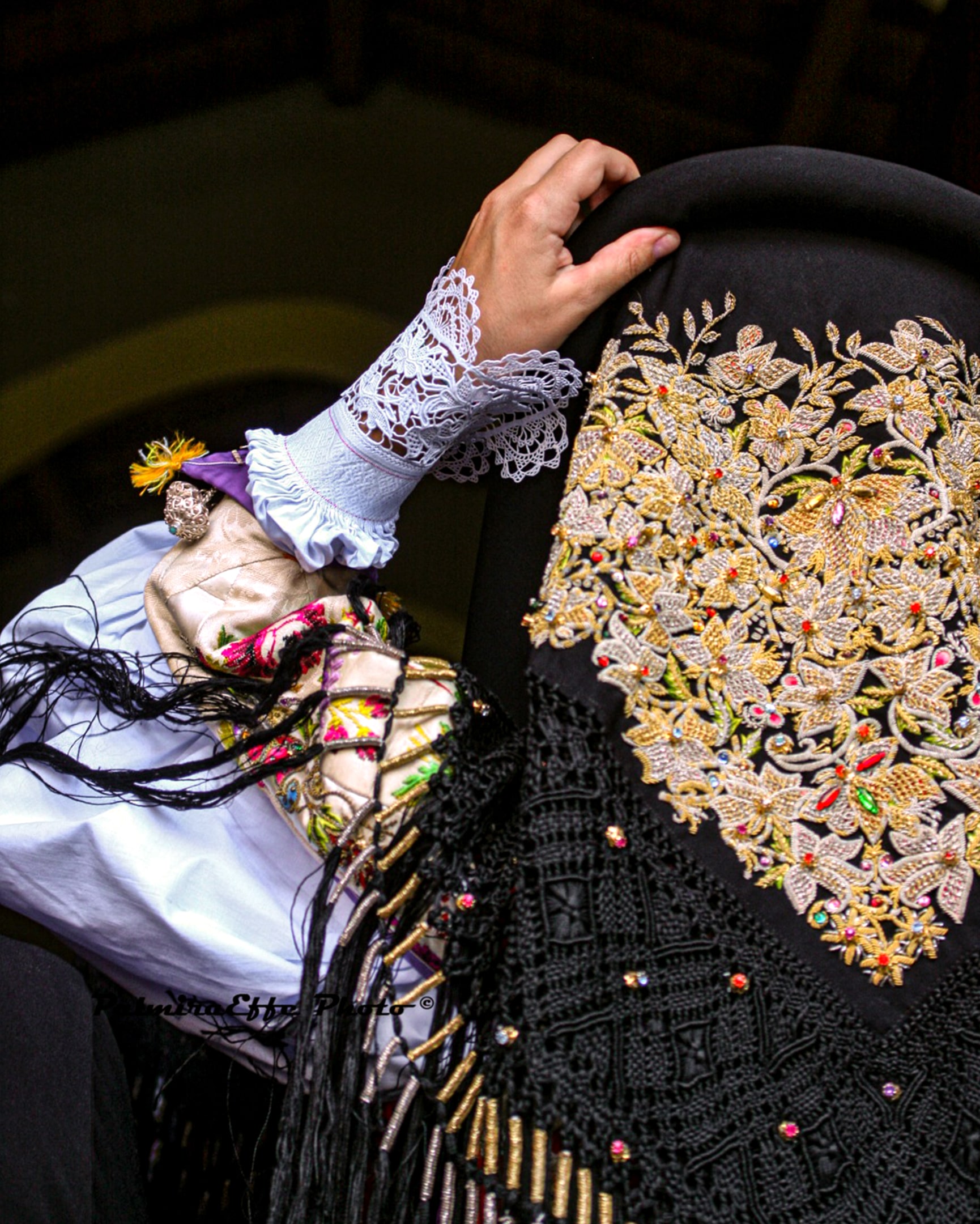 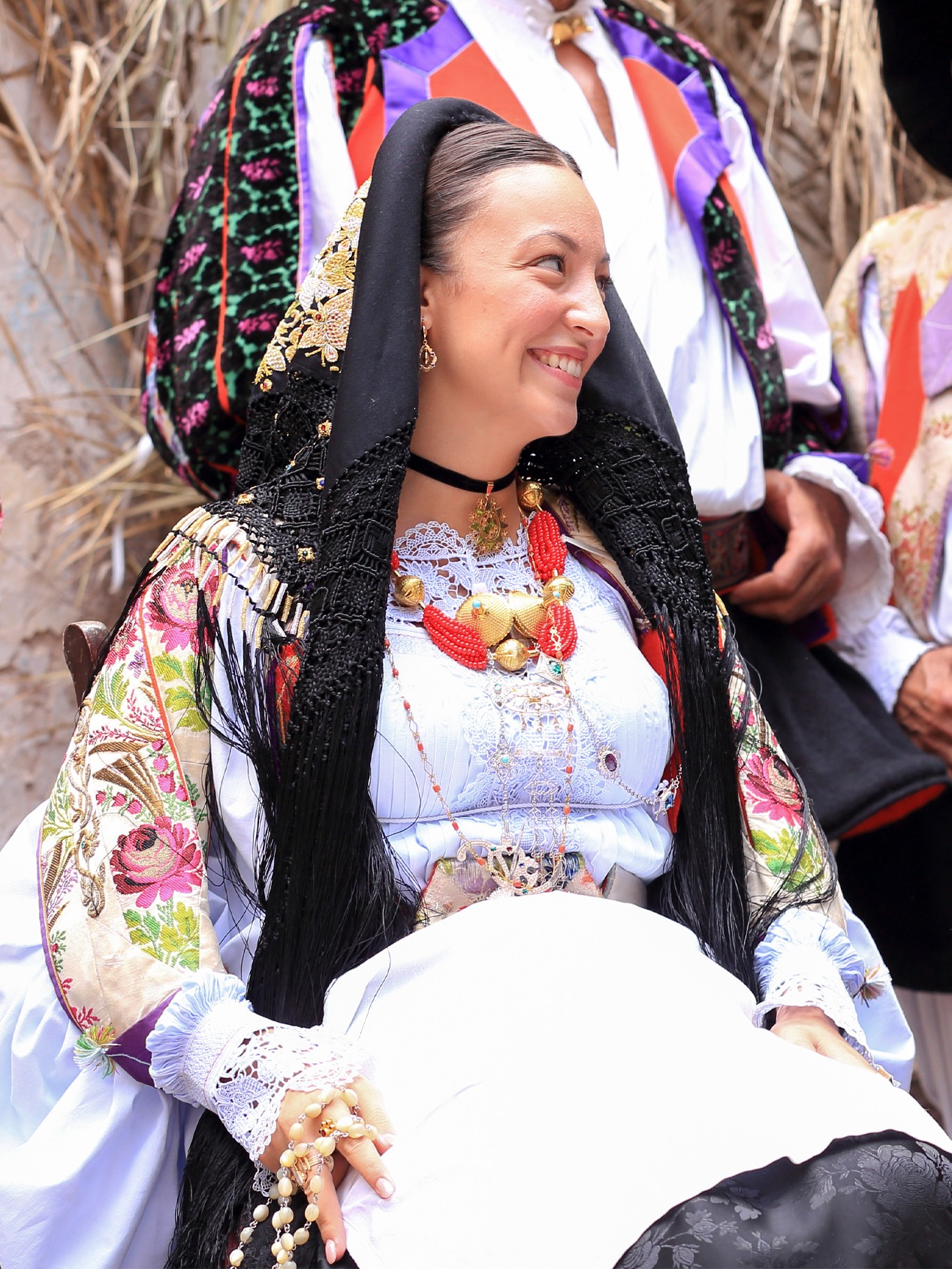 Su muncadore is the headpiece, it is black and made of Tibet wool, and it is considered the most iconic piece of the dress. It is handmade with golden silk thread that depicts flower motifs. The seamstresses always draw according to the client’s taste, making one-of-a-kind pieces. Su muncadore is set by a rolled-up piece of fabric, su chircu, used only to make the headpiece flow gracefully. Another essential element is sa triccia made in macramè, with its acrylic fringes sas himmulas.

Sa hammisa, the shirt, is made in trambicchi (a Cambrai cloth), and it is generally light blue, finely weaved along the wrist and chest.

Su gippone is a jacket of red cloth to wear on the shirt, with a purple border and enriched with brocade or terziopelo

Sa pala è is a corset made of a coloured silk ribbon, brocade and terziopelo, it is worn under su gippone, and it replaces it during summer.

Sa tunica is the skirt. The one used for celebrations is brown or crimson rough woollen cloth; it has white or light blue frills and weaved with solid and lively shapes. The one for everyday uses is made of less expensive velvet, with floral designs. The skirt is finely pleated (sos ghettos) created through a long process to make it last longer.
On the frill, there is sa guarnitura, a decorative piece of lace, or white and light blue tatting flowers and ribbons.
Once all the garments are set, the hemline is finished with a lace of red cloth.

Sa vranda is a weaved apron made with the same technique used for the headpiece and garnished with the same flowers, usually light blue or red.

Sas isharpas, or the shoes, are almost entirely not used today as they were in the past – they are handmade and garnished at the tip by a coloured satin ribbon, sa pupusa. 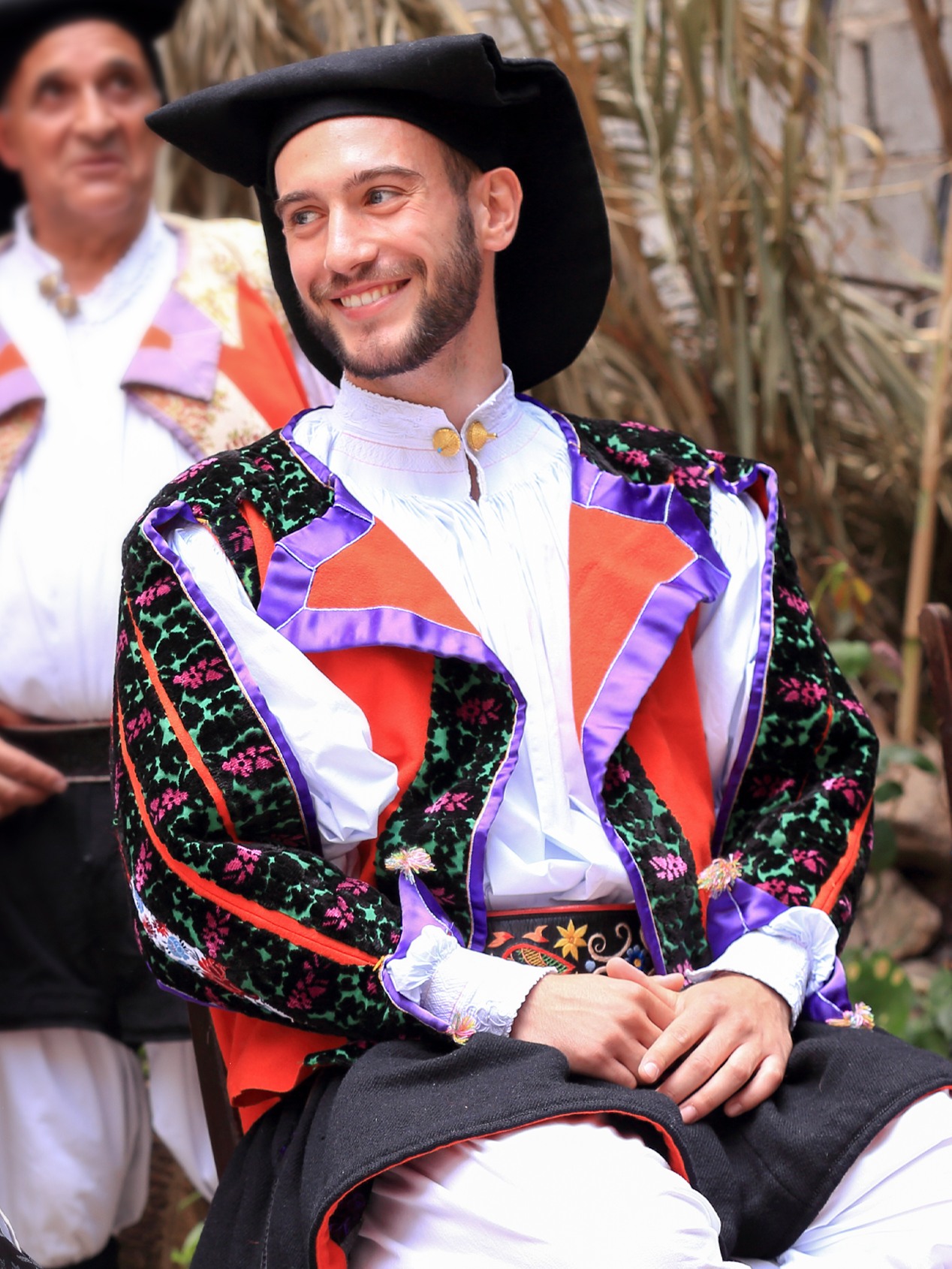 Sa hammisa is handmade with the same technique as the women’s.

Su gippone is a bodice made of different fabrics and covers up to the waistline, leaving the belt out.

Sa hintoglia is a sizeable decorative belt that is weaved or engraved, common all around the island.

Sos carciones de uresi is a little skirt of rough woollen cloth typical all around the island. It probably comes from the East, as it is used in Greece, Albania and Montenegro. Like other dress pieces, its process is long and demanding, taking up to a month to be made.

Sos carciones de tela are large pants made of light blue cloth, and they probably come from Greece.

Sas miggias, are black spats of rough woollen cloth covering the upper part of the shoes.

Sa berritta is the male hat – made of black cloth, is found in almost all Sardinian costumes, and bent backs or sidewise.

Sas peddes, a vest of lamb leather with fur on the inside, is worn as an overcoat. It is generally naturally black and made from black sheep, which was very common in Sardinia once. There was also sa mastrunca made of sheep wool, but it has short sleeves, and it reached the ankles.